We also track the dynamics between the market stakeholders to look behind the technology and pervasive hype to analyze the business realities. “There is no bandwagon on which we will not jump.” might be the motto of some.

Open Source and Standardization: We have strong views on how these could work harmoniously. Contact us to discuss. 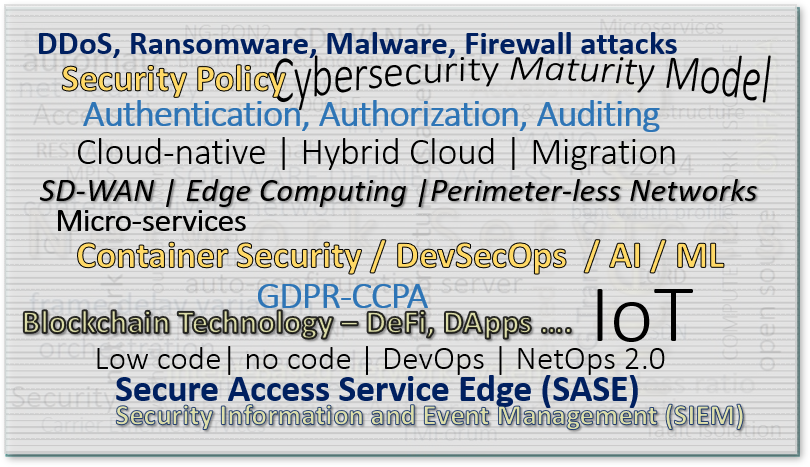 Cybersecurity a theme for 2021

COVID-19 has been the accelerant for the explosion of the Cyber War with trillion dollar impact in 2021. The confluence of migration from data center to Cloud, multi-layer cybersecurity, Compliance, Zero Trust, SD-WAN, SASE, Container Security, Distributed Workforce dynamics, and the business practices for exponential organizations is where we contribute strategic perspective and marketing guidance to have good companies become great in 2021 and beyond.

… and that no-one wants to answer …

Three Security misconceptions:  All you need is a top quality firewall | Cloud-native means no more security issues | Observability is a new word for monitoring (not so) | Zero Trust: achievable or claimed as hype by those with different agendas? | So many questions about 5G: Fixed Mobile convergence – will it be adopted this time? | Will people pay more for 5G or will they get no choice and just pay anyway?  |  Will 5G force up the price of all cell services because  providers have to cover their massive 5G investment somehow? | Will 5G replace fiber (or is it just when and where)? | Are we seeing the beginning of the end for wireline service providers? | NFV? does it have staying power – some think not? | Cloud Services or Cloud Native? |  SDN? | No-one ever made any money from network management – Will NFV save it? | Ensuring revenue retention through NFV/SDN migration: can coexistence really work? | New revenues from services: have the providers reduced their skill set and crippled their innovation?  | Where are they in the voice-controlled home?

Gfast can be faster and cheaper than fiber but does it stand a chance?  | Wi-Fi 6: will it fix the performance issues – will the public buy? |  SD-WAN the NFV killer app – but can we agree a definition – that therefore scales,  interoperates and generates revenues? (the MEF thinks so) | Ditto Software Defined Access | Will 5G FMC mean no more dropped calls or Internet outages? | Will Blockchain Technology cure all known problems and become ubiquitous? (survey says yes) | Aren’t Intent-Based-Network Systems and AI old concepts that have been rebranded or will machine learning radically turn networking upsidedown? | Does anyone know if NFV devices perform under stress? Who has the test methodology? | Does anyone know if internet SD-WAN will perform well enough compared to pt-to-pt? Who has the test methodology? | Open source – proprietary in new clothes? | Open source – great for agility but how can it scale/interoperate? | Do regulatory issues stop providers innovating and waste resources? | Why doesn’t IoT integrate with Wi-Fi?  | Life Cycle Orchestration: which one will win? | Live events: which ones still work – which are just for the (… better not say)?   | When will any or all of these go mainstream?

These buzzwords are great fun to stick in Keynotes but as Rod Tidwell in Jerry Maguire might say: “Show me the money!”. Contact us for more on this.

Communicating ideas requires the listener to understand the concepts and not get “stuck” on terms where the meaning is unclear and lose the message. Many industry organizations pride themselves on being the defining authority for this or that protocol or process but careful examination reveals that the definitions are highly inconsistent and do not create the foundation of language required. Others – “Software Defined Access” is a good example – where you can find a proprietary definitions from 6 or 7 different organizations. MarketWord does not love acronyms.

MarketWord will shortly be publishing a list of network terms and will invite others through it’s Confluence Wiki platform to add/comment. (Sneak preview)

Webinars produced in 2018 covered the above topics, plus 5G Transport, User Services Platform.

MarketWord has been intimately involved in the creation of the messaging, web content, articles, wall charts trade show presentations, authoring on the above topics  … plus Gfast, NG-PON2, virtual business and residential gateways.